Gender Pay Gaps Will Disappear in Law, When Pay Gets Linked To Performance

Gender Pay Gaps Will Disappear in Law, When Pay Gets Linked To Performance

Gender Pay Gaps Will Disappear In Law, When Pay Gets Linked To Performance

As the world celebrates International Women’s Day, it also focuses on the  many obstacles that remain before we achieve societies of true equality.  Whilst law is a more homogenous sector than most, remarkable inequalities remain in place and no more so than with the gender pay gap. 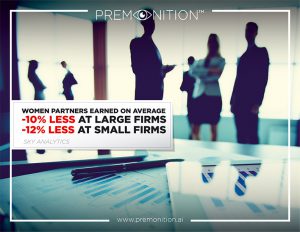 The Law Society of England today released the results of a global survey which found, that men are much more likely than women to believe progress has been made towards gender equality.

Unconscious bias in particular remains an issue and was the most commonly perceived barrier to career progression. 49% of respondents said an unacceptable work/life balance was demanded to reach senior levels; 60% are aware of a gender pay gap at their firm; but only 16% see visible steps’ tak  en to close the gap.

What makes the gender pay gap even more remarkable, other than the rank unfairness and inequality, is that data shows that women actually perform better in court than men.

Premonition has the largest litigation database in the world and we’re adding > 40,000 cases a day, in the US alone.  This provides us and our customers, with a unique insight into lawyer performance, insight that can shine a light into the profession.

One area we are able to highlight is the difference in performance between gender.

According to our data, women partners win 12% more, and women associates win 3% more than their male colleagues.

These data sets certainly highlight the incongruence of an average 10% pay gap between male and female lawyers at large law firms, even more at smaller firms.

Not only are men paid better, but they seem to be delivering a poorer performance.  Seems a warped version of normal market economics.

That these inequalities still exist in 2018, particularly in light of the data, is a blight on the industry but, as Professor Richard Susskind once commented, “it’s hard to go into a roomful of millionaires and  ask them to change their business model”.

And its the reason why, change within the legal sector is almost always driven from outside the industry, whether through changes in buyer behavior and/or new technologies.

We see a remarkable reaction emerge from the buyers of legal services, when they realize that performance data can be added to their overall lawyer selection criteria.

As metric based lawyer selection becomes the norm, then you will finally see an acceleration towards pay gaps being driven by performance, not gender.

Gender Pay Gaps Will Disappear in Law, When Pay Gets Linked To Performance was last modified: July 20th, 2018 by Andrew Weaver
Share